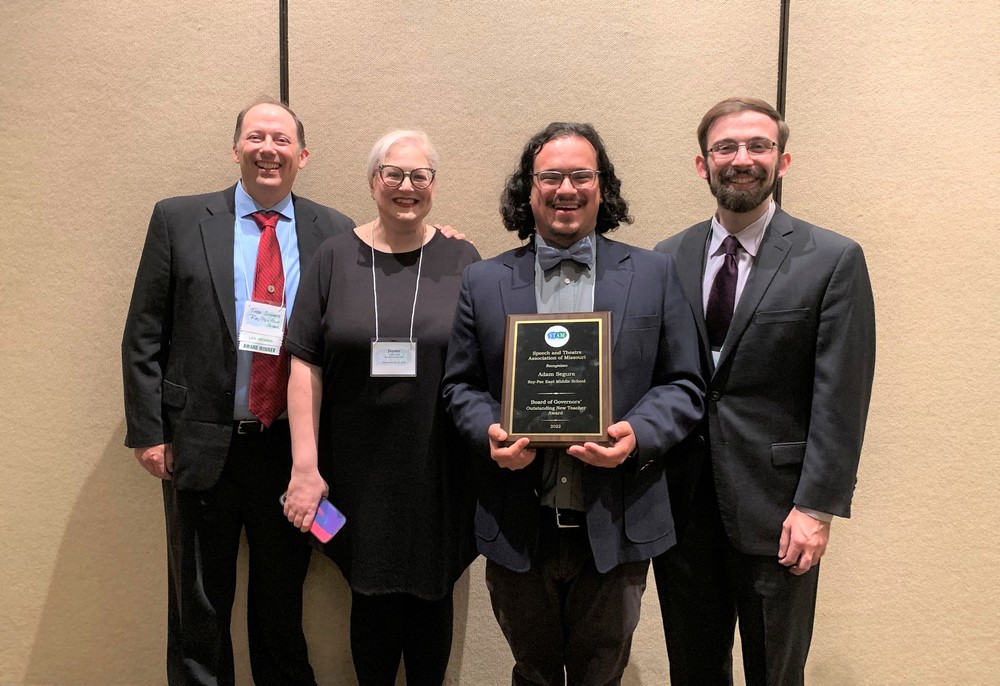 Adam Segura, theatre teacher at Ray-Pec East Middle School, was recently honored for the work he has done in his first four years of teaching.

The Speech and Theatre Association of Missouri honored Segura with its Outstanding New Teacher Award for 2022. The award was presented at STAM’s annual conference.

Segura said he wondered who among his peers might receive the award, and was surprised when his name was announced. He was nominated by Ray-Pec High School Theatre Teacher Dane Schnake, the 2020 recipient of the award.

Segura grew up in Shawnee, Kan., and graduated from Mill Valley High School in 2015,  where he was heavily involved with the theatre department.

“I loved performing on stage for the vast majority of my life starting at 8 years old,” he said. “I auditioned for shows at several community theatres around the Kansas City area and participated in every school production possible. I had it in my head that I would be performing somewhere for the rest of my life. This led me to search for colleges in the hopes of majoring in musical theatre.”

He started college at the University of Central Missouri majoring in musical theatre. He changed his major to speech and theatre education in the spring of his freshman year.

“After being cast in my first musical, something flipped like a switch. After watching my professors direct some of the best talent I had the privilege of working with, that was the moment I knew I wanted to be a teacher,” Segura said. “I also have a big family filled with several teachers and lots of little cousins, and a nephew. I was always pretty good at connecting with the kids at family gatherings and having a part of ‘coaching’ my nephew at a young age. Both of these factors are what I credit to me becoming the educator I am today.”

After graduating in 2019 from the University of Central Missouri with a bachelor's degree in speech and theatre education, he came to Ray-Pec to fill a position left vacant when former theatre teacher Pam Schnake retired.